Living on a futuristic space station by Vijaya Schartz

Imagine debarking from a spaceship into a vast array of wide corridors like an airport terminal. Except that the entryway seals are hermetic, and the side windows show black space, with spaceships anchored to the giant circular wheel encircling the space station, like the rings of a planet. The station floats in space, orbiting a small planet. Or it could be in the wide orbit of a faraway sun. The station, built and expanded over centuries, would be made of many different parts, some older, others brand new. Size is irrelevant in space. It can be as big as needed.


First, you would notice the lighter gravity. You might even get sick. If you spent much time in space, it would be familiar, but if you came from a heavy world like Earth, the change would be noticeable. You would probably grow taller over time, as gravity doesn't pull you down as much, but your bones might grow lighter and weaker.


Hundreds of thousands could live there. Even millions. They would have room for growing food without dirt in hydroponic tubs, they would manufacture artificial meat in labs, without raising animals, and they would make their own water and their own oxygen. The complex would function like a large city, not bound by the planetary cycles of day and night... although they may want to create a semblance of circadian rhythm for the comfort of their visitors and inhabitants.


The station could be a port for trading goods, with commercial docks and cranes to load and unload large containers from ships to dock and vice-versa. It could also be a pleasure destination. I imagine a Vegas type of atmosphere, with entertainment, gambling dens, spas, shopping, restaurants, and all the luxuries we imagine in the future, like cyber-pleasures... the legal and the illegal kinds. I personally like the idea of sex robots.


By the time we get to that level of sophistication, we may have made contact with other space-faring races, and that might bring diversity (and possibly discrimination) into our advanced society.

Such a place would need tight security. Space is not the safest place. There would be corruption, gangs, drugs, terrorism, and individuals striving for control. Delinquents would be detained in jail-like areas. There might even be a prison, but who needs metal bars when a clear titanium pane can do the trick?

At the core of the structure, would be a reactor to generate the energy needed to keep that city in space running smoothly. As we know, reactors can become unstable. More fodder for future stories.

But what would happen to those forgotten by the system? Orphans growing on the fringe of the affluent society, escapees, and stowaways might be reduced to hide in disaffected parts of the station and form their own society. They might steal in order to survive. So far from central power (and from the overseeing authority), such a community might recourse to shortcuts, unethical practices, and oppression of the underprivileged.


As you see, the world of tomorrow may not be so different from ours, because no matter how many advances we make in science, health, and space exploration, human nature doesn't change that much.

It's all about survival, and the balance of good and evil. And that controversy will not soon be resolved, so there is plenty of fodder for upcoming science fiction novels.

In the meantime, you can learn more about life on a space station by reading the Azura Chronicles. Book 1, ANGEL MINE is already out and Fianna, my heroine, is a bounty hunter. But she was born on the Byzantium-5 space station, orphaned as a teenager, then survived with the protection of a violent gang, the Dragon Squad. 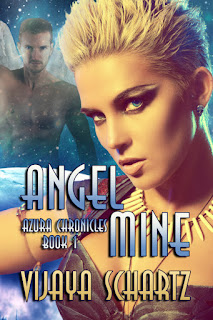 What in the frozen hells of Laxxar prompted Fianna to pursue her quarry to this forbidden blue planet? Well, she needs the credits... badly. But as if crashing in the jungle wasn't bad enough, none of her high-tech weapons work. She'll have to go native, after the most wanted felon in five galaxies. It's not just her job. It's personal.Acielon has never seen an outworlder like this fascinating female, strangely beautiful, and fierce, like the feline predator loping at her side. He always dreamed of exploring the universe, despite the legends... and the interdiction. Is it truly a hellish place of violence, lies and suffering? If it spawned this intriguing creature, it must also be a place of wonders, adventure and excitement.Fianna's instincts tell her someone is watching. Sheba, her telepathic feline partner, doesn't seem worried... yet, something on Azura isn't quite right. 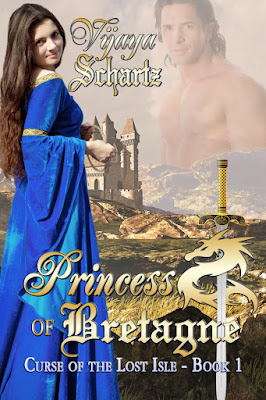 For a limited time only, PRINCESS OF BRETAGNE, Book One of the Curse of the Lost Isle medieval fantasy series, is only 99cts in all ebook formats.

This book is also available in paperback from B&N and amazon.

"If you like your medieval romances spiced with a little sword and sorcery, like the Mists of Avalon by Marion Zimmer Bradley, you'll love Vijaya Schartz's Princess of Bretagne."

From history shrouded in myths, emerges a family of immortal Celtic Ladies, who roam the medieval world in search of salvation from a curse. For centuries, imbued with hereditary gifts, they hide their deadly secret, stirring passions in their wake as they fight the Viking hordes, send the first knights to the Holy Land, give birth to kings and emperors... but if the Church ever suspects what they really are, they will be hunted, tortured, and burned at the stake.

Princess of Bretagne - Book One

806 AD - Alba (Ancient Scotland) - As the Vikings raid the coast of Alba, Pressine of Bretagne sets out to seduce King Elinas of Dumfries, chosen by the Goddess to unite the tribes against the foreign invader. Elinas, still mourning his departed queen, has no intention to remarry. Head-strong and independent, Pressine does not expect to fall for the very attractive, wise and noble ruler... Furthermore, her Pagan nature clashes with the religious fanaticism of the king’s Christian heir, who suspects her unholy ancestry and will stop at nothing to get rid of her.

"Schartz paints a realistic picture of life in a medieval castle, with all its smells, tastes, visuals, and feelings, and as always, all the primary, as well as the secondary characters are well-developed and interesting. I’m looking forward to the others in this series." - Manic Readers 4.5 stars

"The exciting battles and period details also drew me in as did the intrigue surrounding Elinas' son trying to prevent him from marrying Pressine. Overall, Princess of Bretagne was a solid story that I enjoyed reading. I'm very much looking forward to finding out what's next for Elinas and Pressine when the series continues with the release of Pagan Queen." - 4 stars - The Hope Chest Review

"The story is filled with action and danger and there are many interesting secondary characters that help drive the plot forward. I particularly like Gwenvael, Pressine's brother... Look for the just released PAGAN QUEEN, to continue the saga of these two lovers." - Four ribbons - Romance Junkies.

Find these books on the author's page at:amazon - B&N - KOBO - SmashWords
Posted by Vijaya Schartz at 11:10 AM No comments: