The dramatic story of a writer's cat - by Vijaya Schartz

My kitty cat Jasmine, a princess in my mind, has a dramatic story worth sharing, and who better than me to tell it?

As a kitten, like all kittens, Jasmine was cute and cuddly. A nice family found her abandoned by a feral mother and adopted her. They called her Jasmine because of the yellow in her calico coat. They had a house with children, and a big guard dog. Jasmine was allowed outside and had a very independent life.

Curiously, without a mother, or another cat in the house to teach her how cats behaved, Jasmine never learned to play like a cat. Instead, she learned manners from the big guard dog. So, when a stranger approached the house, she growled warnings and thought it was her job to protect the house and its occupants.

At five months, before learning to be a cat, Jasmine became pregnant. Like all expecting mothers, she was very protective of her future litter. So, when the big guard dog challenged her, she faced him, hissing and growling, like a dog ready to fight. The big dog did not understand that she was protecting the little ones in her belly, so he stood his ground.

Jasmine attacked. Unfortunately, the five-months-old kitten was no match for the big guard dog. The dog caught her small head in his powerful jaw, clamped down, and shook the kitten like a rag doll.

The family ran to her help, but by the time they calmed the dog and convinced him to release his prey, poor little Jasmine lay there, inert, bleeding, unconscious. They rushed the kitten to the vet and left it there, saying, even if Jasmine survived her ghastly wounds, they could not take her back, because their guard dog had tasted her blood. It would be too dangerous for the kitten to return.

Upon examination, the vet discovered that the dog's fangs had pierced through the kitten's head, perforating sinus and bones. Jasmine needed extensive surgery, and there was no guarantee at all that she would survive. But the vet loved animals and suspected Jasmine had a strong will to live. So he took it upon himself to perform the first surgery... then the second... then the third. The unborn kittens did not survive, and the vet neutered Jasmine.

That spring of 2007, I had lost my little companion of seventeen years, a mixed Siamese cat named Geisha. It took me months to finally decide to adopt a new kitty who needed a good home.

In September of 2007, After months in recovery, Jasmine was back among the living and up for adoption through HALO, a no-kill shelter. Among the kittens in the cages at PetSmart adoption center, she was the largest cat. Now nine months old, she was much older than the cute little fur balls playing with each other. She did not play, and despite her regal posturing, she had the serious look of those who have suffered.

When I read the paper stuck to her cage, detailing her health history, my heart broke. She'd been up for adoption for a while without luck, and as a result, she was on sale. I took it as a sign that we were meant to be. So, I adopted Jasmine, and brought her home.


Because of her pierced sinuses, she doesn't purr loudly like a regular cat. Her purr is imperceptible, but I know when she purrs. And she is susceptible to sniffles. Imagine my surprise when a writer friend came to the front door to attend my critique group, and the young cat started to growl low in her throat, like a dog. 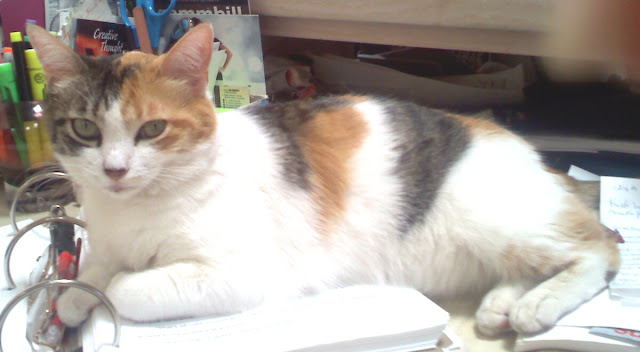 Since Jasmine had lost her unborn babies, I thought maybe a kitten would keep her company, and she might enjoy playing with it and caring for it. When another writer friend of mine had a litter, I adopted a cute little tuxedo cat. Unfortunately, Jasmine did not like other cats, not even kittens. She wanted me all to herself. So she spent more and more time outside, where she watched the other cats in the neighborhood. When the new kitten played with the toys, she always watched from the upstairs landing, but never participated in the game.

As always, life interfered. Eventually, I left my house (and my husband), and I took Jasmine with me to live in a small apartment. She is now ten years old, and has become a plump cat. Some would call her fat, but my friends call her well-fed. She loooves her tuna. I taught her to play, but she still prefers watching me play with her toys. She also enjoys watching the outside world from her ivory tower on the patio of my third floor apartment.

She needs lots of cuddles and she is getting them. She has what she always wanted, me, all to herself. She is the most loving companion I could ever wish for. I hope we enjoy many more years together. 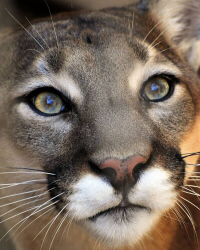 My love of cats transpires in my books. Except for my medieval series, there is a cat in most of my stories. Check them out. Here is the cat in my upcoming summer release, Angel Mine, it's a genetically engineered puma with incredible abilities. Her name is Sheba and she is a bounty hunter companion.


Vijaya Schartz
Romance with a Kick
http://www.vijayaschartz.com
Amazon - Barnes & Noble -  Smashwords -  Facebook -
Posted by Vijaya Schartz at 11:31 AM No comments: